Did you know that all-electric cars purchased after 2010 are subject to federal tax?

Now this federal tax credit could amount to $7,500 depending on your location, type of vehicle and the battery capacity the vehicle uses.

Here are some of the federal tax credits on some popular all-electric vehicles. 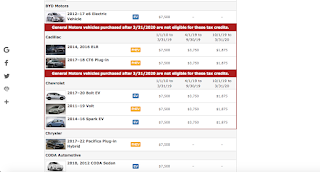 This package that would provide buyers of electric vehicles with a plethora of new tax incentives was enacted by American lawmakers last week and signed into law by President Biden.

In order for customers to be eligible for the $7,500 tax credit, it is now necessary for EVs to be assembled in North America using domestically sourced materials or those from recognized trading partners.

The plan makes numerous changes to the tax credit to make it simpler and more accessible, but its aim is to increase domestic production of electric cars rather than to increase demand.

As a result, starting on the day the bill was signed, EVs made outside of North America will not be eligible for the "old" EV tax credit.

Other factors depending on battery components, such as income and price cap restrictions, will also be taken into account later this year when the Treasury publishes advice on them. The measure also increases the 200K credit cap per manufacturer; however, this change won't take effect until the start of the next year.

The end rebates for most electric vehicles.

Since the law mandates that automakers construct their electric cars in North America in order to qualify for the incentive, it poses a short-term issue. Many of the top-selling EVs (except for Tesla) aren't made in the US, and even those that are made in the US, frequently include battery parts sourced from somewhere else.

Price caps are also part of the law. Cars must have a sticker price under $55,000 to be eligible, and SUVs and trucks must cost less than $80,000. Many of the EVs on the market now might not meet these specifications.

According to my estimates, the new discount may only apply to 11 of the 72 EVs that are currently on sale.

As I pointed out previously, 70% of 72 U.S. electric, plug-in hybrid, and fuel-cell EVs that currently qualify, became ineligible upon Biden's signing of the bill.

That's because none would qualify for the entire credit when factoring in sourcing restrictions, new income, price caps, battery, and essential mineral sourcing standards, and other provisions of the bill take effect on January 1st.

The Congressional Budget Office predicts that 11,000 new EVs will qualify for tax credits in 2023, assuming a $7,500 per vehicle threshold.

What Qualifies for the New EV Tax Credit?

Previously, the tax credit eligibility of automakers who sold more than 200,000 relevant vehicles was phased away. Though other automakers like Ford and Toyota were also on the verge of losing eligibility due to how many new battery-equipped vehicles sold - General Motors and Tesla are two notable examples.

The new bill also fixes the tax credit for new cars at a fixed $7,500 rather than basing it on the total battery capacity. Additionally, it aims to broaden the credit's use to include fuel cell EVs as well, giving automakers promoting those models a chance to participate.

The measure also had a "transition rule" that allowed buyers who signed a binding purchase agreement to continue to be eligible for the "old" EV tax credit if they did so the day before the law is signed, which led to a mad scramble to close EV purchase deals.

In order to qualify for a tax credit later in life, consumers may have to settle for a used model of their preferred non-qualifying EV because it would be challenging for automakers to change the sourcing and manufacturing requirements of many ineligible vehicles by the end of their respective product life cycles.

The demand for electric vehicles is at an all-time high. But the uncertainty surrounding the new tax incentives could pump the breaks on US EV growth and demand. This is especially true if customers are pressured into signing purchase agreements for cars they aren't even sure they want.

Finally, automakers must now work quickly to understand the bill in its totality and determine how to modify their individual procedures in order to be accepted into one of the biggest marketplaces for new vehicles in the world.

Here are some EV Tax Credits on some popular automobiles: