While no official dates have been set for when Tesla will eventually introduce electric ATVs, there is a children's version that was rolled out in collaboration with Radio Flyer. I recently had the chance to test out the Cyberquad for children and I can say that it is really exciting for both adults and kids.

As someone who has multiple kids, Elon Musk made sure the youth ATV was really built for kids and made sure to comply with the federal laws on vehicles for kids. However, that does not mean those that are kids at heart like myself cannot enjoy it as well. We have Elon Musk to thank for this. Tesla is known for their electric vehicle inventions, and they have no shortage of ideas. However, they are not really known for building ATVs for kids. We all know that ATVs for kids and pretty much all motorized vehicles for kids is the domain of Radio Flyer, making this a match made in heaven.

The ATV was announced in 2019 alongside the Cybertruck announcement, but it seems to have slipped under the radar. According to Elon Musk, the Cyberquad is an electric ATV that might be appearing soon.

None of this is unique to the electric vehicle brand. A quad or ATV is out of the normal for a company like Tesla. When Tesla first announced the electric ATV, Elon Musk used it to show the payload capacity of the Cybertruck on stage.

According to the approved patent application, the Cyberquad has a few potential uses. The CYBERQUAD™ trademark covers all-terrain, land, and electric vehicles, including all-terrain automobiles, motorcars, trucks, and structural parts. In another place, it also covers clothing and apparel.

What other accomplishments did Tesla disclose in the patent application According to the documents, Tesla applied for patents covering an all-wheel-drive mechanical suspension and maximum tire pressure system, with disc brakes specifically designed for a quad to reduce crash and injury.

So, it seems like Tesla has been working on this project for a while, and we might finally see it come to fruition soon. Although it is almost impossible to prevent crash and injury hazards, Tesla is doing its best to minimize them.

Musk said that the quad would accompany the Cybertruck to some degree when it was first announced in 2019. However, there hasn't been much talk about it since then. Nevertheless, Tesla just pointed out this unique patent on September 27.

Is Tesla ready to revive the Cyberquad project?

There may be a connection between Tesla Cyberquad and Cybertruck manufacturing

Tesla has been hard at work to get all of the latest Gigafactories up and running - one of which will assemble the Cybertruck. A few months ago, Elon Musk noted that the Cybertruck wouldn't be rolling out of the factory for a bit due to the slowdown of production processes across the board (affecting factories worldwide). However, Musk expects Cybertruck production to begin ramping up in 2023.

Is it possible that the Cyberquad production will ramp up alongside it? We can't say for sure, but never communicate with this company!

In a tweet by Musk on November 22, 2019, he responded to someone saying that "the Tesla 2 person electric ATV will be the first to come out as an alternative to the Cybertruck." So far, none of the Cybertruck reservation holders have noted this as an option.

Musk hasn't commented much on the specs of the electric ATV either. It would be wise to have a smaller vehicle to accompany the truck on off-road adventures. The Tesla Cyberquad and Cybertruck have been facing production delays, according to Electrek. YouTube is full of people who have made versions of the Cyberquad using the basic idea. Electrek says it is a "Yamaha Raptor ATV converted to an electric vehicle with a Zero Motorcycle powertrain." Hot Wheels decided to create a 1:10 scale version of both vehicles. The Hot Wheels Cybertruck comes with its own little Cyberquad and a real controller. It's hard to say when the ATV and Tesla Cybertruck will be available, but they may eventually show up.

Who knows these days? So for the rest of this article, we will e focussing on the Cyberquad that we know does exist and that's the Tesla ATV for kids.

I was fortunate enough to score my son a ride in one of the few Cyberquads out in the wild and it was surely a fun experience for him as you can see in the Youtube video below.

Theoretically made for kids

The Radio Flyer Tesla ATV is theoretically designed for kids. However I could not help but take it for a spin and it was so much fun. As I mentioned earlier, this electric vehicle is a collaboration between Radio Flyer and Tesla, and it is incredibly powerful. The lithium ion battery operates at 36V and 500 volts of constant speed electricity. 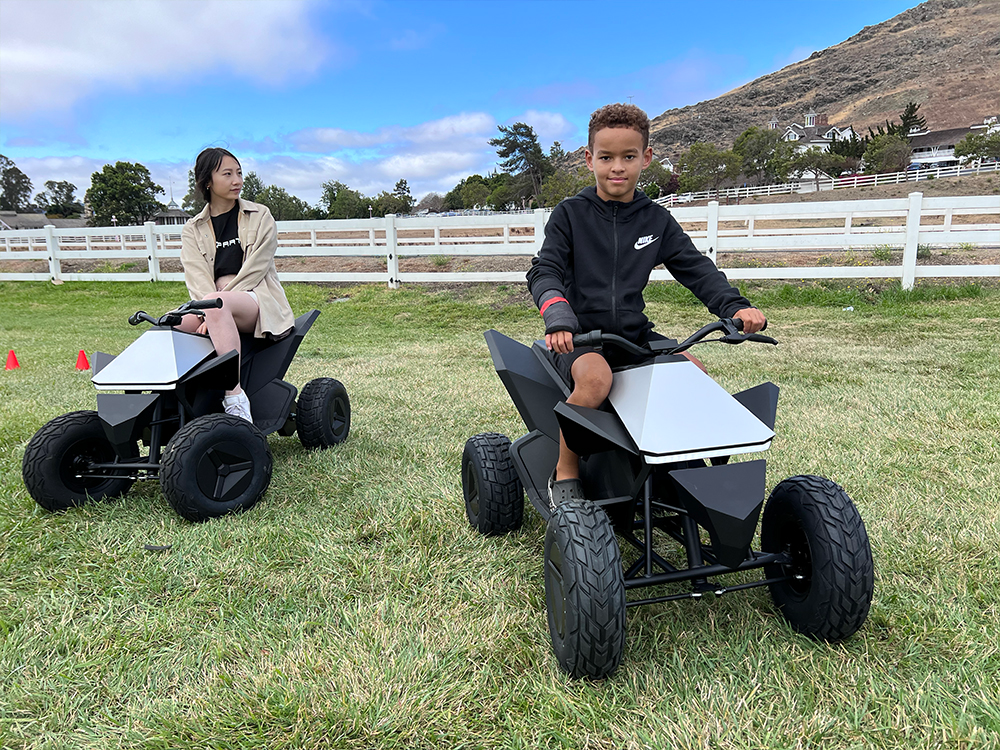 Tesla Cyberquad: What is the design?

In its initial unveiling, Tesla was a bit quiet with regard to Cyberquad. Tesla showed how ATVs can charge from a lithium ion battery-powered vehicle via a 110V or 240V outlet. It is also capable of being placed in front of trucks because of its 100 ft storage capacity. The video sparked speculation that the Cyberquad would be an updated Yamaha 700 Raptor ATV. Yamaha has previously told Fox News Auto that he is

In 2019, Musk announced on Twitter his ability to carry two people. Musk said the Cyberquad has a “real low center of gravity”. Batteries in electric vehicles should also sit at a lower point to reduce the load. Musk has said he is planning to take action on suspensions. There was no specific word about what, but the guy says the ATV won’t roll.”

FlySpeed LiIon Batteries are designed for long rides with maximum power. The batteries have an extended range (15+ km). They charge 3 times faster than typical batteries. Quick Release Flight Speed® batteries can be easily integrated with an external battery to connect directly to the Cyberquad's Adapter.

Parents can easily set up two speed settings at the rear to set a maximum speed between five mph and 10 mph. In the lower setting, the user can regulate the speed from 0 - 5 mph using his thumb throttle. In the high settings riders are responsible to control the acceleration between 1100 kmph and 100 kph.

The big wheels have air traction for the smooth and comfy ride. 16" wide front tires provide optimal steering ability, whereas larger rear tires provide smooth riding. The wheels also have disc breaks. The disk breaks not only allow for quicker stopping distance, but also for a much smoother ride. At a range of 15 miles, you would be surprised how often you will be relying on thee disc breaks can be.

This vehicle for Kids is made from steel and provides strength for a maximum riders weight of 150 lbs. 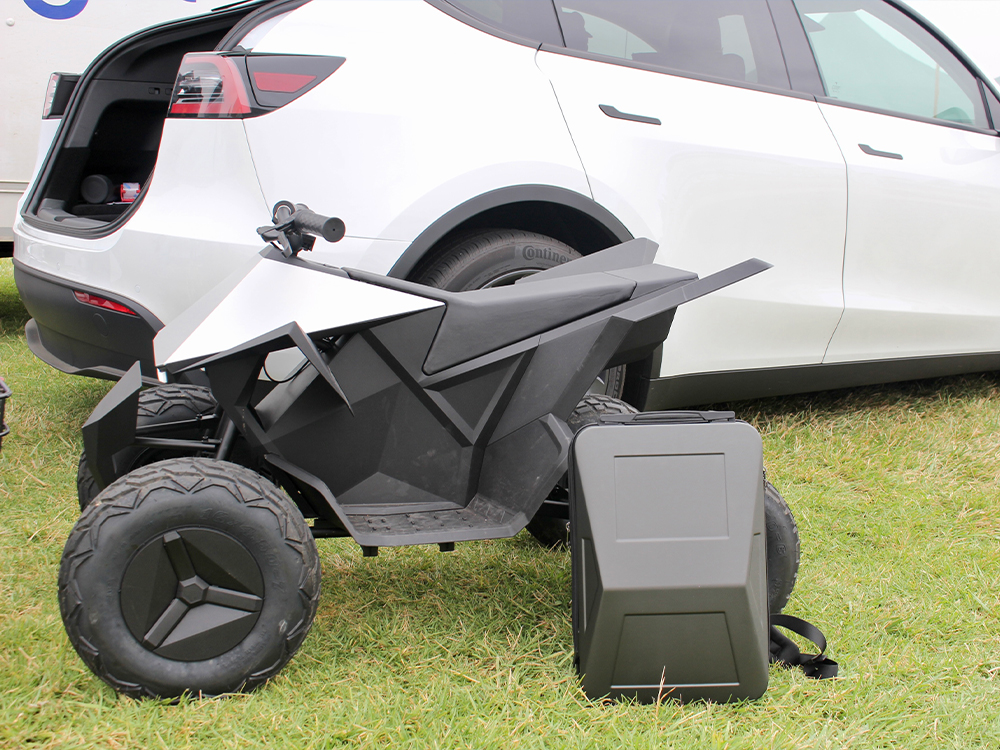 Cyberquad for Kids by Radio Flyer has a game-changing design inspired by the Tesla Cybertruck.

Cyberquad is a collaboration between Radio Flyer and Tesla Design Studio. Featuring Cyberpunk-shaped faceted panel with LED light bars to complete the look.

Let's answer some of your burning questions:

How much does the Tesla Quad cost?

Is Tesla making a Cyberquad?

How much is the Tesla ATV cost?

Is Tesla coming out with a ATV?

Is the Tesla ATV real?

How fast does a Tesla 4 wheeler go?

Is there a Cyberquad for adults?

How fast does the Tesla ATV go?

How much is the adult Tesla Quad?

How expensive is a Cyberquad?

How much does the Tesla Cyberquad cost?

Will Tesla sell the ATV?

Is the Tesla ATV out?

Is Tesla building an ATV?

Is the Tesla Cyberquad out?

Is the Tesla Cyberquad street legal?

How much did the Cyberquad cost?

How fast can the Cyberquad go?

How much does the Tesla Quad weigh?

How much is ATV with Cybertruck?

How much is a Tesla ATV?

How fast is Tesla 4 wheeler?

Does Tesla have a quad bike?

Will the Tesla ATV be for sale?

How much will the Tesla Cyberquad cost?

How much does the cyber ATV cost?

How fast is the Tesla ATV?

If you are sick and tired of waiting to get your hands on the highly anticipated ATV, the Cyberquad for kids or the Cybertruck, you may want to consider looking into Tesla-inspired products such as the Cyberbackpack. Learn more about the Cyberbackpack and its incredible capabilities at www.cyberbackpack.com.